Cotoneasters are a large group of plants that show a lot of variation but make great garden subjects for a wide range of different applications. These plants are showy, easy to grow, and require little maintenance.

Read on for an introduction to the genus and general information on their care.

What Is A Cotoneaster?

Cotoneasters are a genus of plants in the Rosaceae family. Most species are shrubs or small trees without spines, and they can be either evergreen or deciduous. These plants are native to North Africa, Europe, and Asia, with the greatest diversity of species being found in China.

Cotoneaster can be a tricky word to say. It is correctly pronounced as ko-toe-nee-AS-ter, rather than coton-easter. The size of these plants varies according to species, with some growing as tall as 50 feet (15 m) and others less than 2 feet (0.6 m).

These plants have alternately arranged leaves with smooth margins. In the growing season, the leaves tend to be dark green and glossy above with the underside usually a paler shade.

The cotoneasters that are cold-hardy tend to be deciduous, whereas the evergreen species are adapted to warmer environments. Many deciduous species have wonderful fall colors ranging from orange to red.

There are a huge variety of cotoneaster species and cultivars available. A small selection of useful species is introduced below:

The creeping cotoneaster is a low-growing deciduous species that is native to China. These plants make a fantastic groundcover that spreads as wide as 6 feet (1.8 m) while staying lower than a foot (0.3 m) in height. This species produces white to light pink flowers and is best grown in full sun to partial shade in zones 4 to 8. (1)

This low-growing cotoneaster reaches about 3 feet (0.9 m) in height but may spread to 8 feet (2.4 m) across. It is a deciduous species that can be grown in full sun to partial shade in USDA Hardiness zones 5 to 7. (2)

Fishbone cotoneaster is a slow-growing but versatile plant that has pink flowers. It can be grown as a taller ground cover and is very useful for mass plantings and bank stabilization. These plants also make fantastic espalier subjects and look great when grown on stone walls.

The hedge cotoneaster is a medium to a large deciduous shrub that usually grows 6 to 10 feet (1.8 to 3 m) tall. This northern Asian species produces pinkish flowers and makes an excellent hedge or screen plant for gardens down to zone 3. (3)

The willow leaf cotoneaster is a large shrub from western China that can reach heights of up to 15 feet (4.5 m). These plants produce white flowers and are less cold-hardy than other species, being suitable for gardens down to zone 6. This species makes a great hedge, screen, or windbreak if grown in full sun to partial shade. (4)

Cotoneaster flowers usually occur singly or in clusters known as corymbs and are most often produced in the spring. The flowers are small and have 5 petals each. Flower color in this genus varies according to the species and can be anything from white to red.

These plants produce a showy crop of berries after flowering that is most often red in color but may also be darker.

These fruits usually become ripe in the late summer and fall and often persist on the plants for long periods, providing winter interest. Each fruit contains 1 to 5 seeds and they are usually first produced in the plants’ third year.

How To Grow A Cotoneaster Plant

Cotoneasters can be grown from seed that is collected from ripe fruits in the fall. The seeds require periods of warm and cold stratification in order to break dormancy and become fertile.

Alternatively, these plants can be grown from cuttings and, fortunately for gardeners, all the cotoneasters tend to root easily. Many growers have also had success with propagating new plants by grafting and layering. (5)

Cotoneasters grow best in well-drained, fairly deep, and fertile soils. For shrub-like species, applying a layer of mulch once or twice a year will help suppress weeds and retain moisture to the roots. When applying mulch, just be sure to keep the plant’s crown clear to avoid rot.

These plants should be given water regularly in hot dry periods, and as a general rule, plants grown in containers will need more frequent watering.

Most cotoneaster species prefer full sun to partial shade and their cold tolerances vary according to species, although you should be able to find a good type for your garden if you live in zones 4 through 10.

Cotoneasters respond well to pruning, although they usually don’t need much attention. You may want to neaten up your plants on occasion and old, sparse branches are best cut back to the stem. (6)

These plants are generally quite resistant to pests, although this will depend on your area and growing conditions. Keep a lookout for infestations of lace bugs, red spider mites, and wood borers. They are similarly resistant to disease, with some cases of fireblight being reported.

With so many different cotoneaster species and cultivars available, there is an option for just about any use in the garden you can think of.

They can be espaliered, grown along borders and foundations, used in beds and mass plantings, or grown on slopes as a groundcover and soil stabilizer.

Smaller species can be grown in pots and containers as well, while larger species are often used to create hedges, screens, and windbreaks.

Cotoneaster fruits are mildly poisonous and can be dangerous if eaten in large quantities, causing symptoms like breathing difficulties and seizures. They should not be eaten. (7)

The flowers of cotoneasters are very attractive to pollinators like bees and butterflies, and many types of birds will feed on their abundant fruits. Cotoneasters are also known to be deer resistant.

Unfortunately, a number of Cotoneaster species have become invasive after they have escaped gardens when planted outside of their native range. Gardeners are encouraged to find out about invasive species affecting their areas and avoid using them in the garden.

The growth rate of any plant will vary depending on the characteristics of its species and your growing conditions. There are slow and faster-growing cotoneaster species.

Are cotoneaster berries poisonous to dogs?

Cotoneaster berries are known to be mildly toxic and should not be eaten or fed to your pets.

Most cotoneasters grow best in full sun to partial shade. Plants in shady areas will likely grow poorly, taking on a thin and leggy form, and produce a smaller number of flowers and fruits.

With so many different cotoneasters available and the great variety of growth forms they take, there’s sure to be one to suit your needs in the garden. Just be sure to check up on the potential size, growth form, and cold hardiness of any species before planting it in your garden. 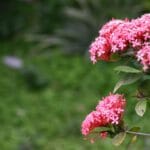 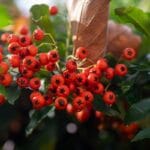 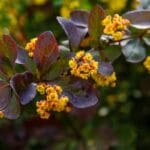 How To Grow and Care for Barberry (Berberis spp.) 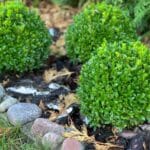 How To Grow And Care For Boxwoods (Buxus spp.) 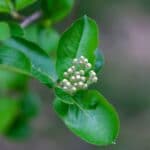 How To Grow and Care For Aronia shrubs (Aronia melanocarpa) 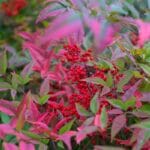 How To Grow and Care for Heavenly Bamboo (Nandina domestica)