Many just see flowers as a natural decoration for their yard, but there’s a secret that some flowers hold you can eat them! Don’t run outside and taste all of your plants right away, but know that you might already have some edible flowers growing in your own yard.

Hibiscus flowers have a very tropical look to them, and can be found in tropical climates. It only makes sense that their flavor matches their appearance. Hibiscus flowers are said to taste sweet, like a cranberry, and are often used in teas, particularly iced tea.

Contrary to their sweet extract used in tea, chopped hibiscus flowers supposedly have a tangy flavor that is sometimes used in salads.

Perhaps one of the more commonly known edible flowers, lavender, is used in a variety of different foods. If you’ve never tried lavender in chocolate, you need to do so!

Lavender has a sweet floral taste but can also give off a savory taste depending on how it is used. Some common places to find lavender are in sweet drinks, ice cream, chocolate, and as a garnish on other desserts.

Many see dandelions as a pesky weed that need to be eliminated from their yard, but to some, they’re a delicacy. One of the neat aspects of the dandelion is that every part of the plant is edible, all the way down to the roots.

The petals are said to have a bittersweet flavor that is used in tea, jelly, wine, and sorbet. The leaves are often used in salads, sautéed to eat on their own, or as a garnish.

The leaves may have a bitter taste if not picked early enough. The dandelion roots are not particularly tasty, but they are edible and provide a good source of nutrients. Some grind them up and use them to extend coffee beans, others boil them and eat them plain.

Pansies are a common sight to see in nearly any neighborhood, but what many pansy growers may not know is that their flowers are edible.

Pansies do not have a strong flavor, but do provide a mild earthy addition to your meal. They are most often used as a garnish, but some use them in salads.

Have you ever asked yourself the question “are roses edible?”. Another fairly common flower used in foods are roses. Roses are said to taste similarly to how they smell, but may have a mild bitterness to them depending on how they are used.

Roses are not only used for drinks, but have been added to salads, desserts, or turned into a jam.

Sage flowers are very versatile in the edible flower world. When eaten raw, sage flowers do not have much of a taste, but when added with other foods, they bring a sweet and savory flavor.

Sage flowers are used to make jelly, vinegar, pesto, and syrup and are used in ice cream, tea, salads, and as a garnish in cocktails. Some even use them as sugared flowers to add to cakes and other desserts.

Marigolds are another very common flower that many people might not realize are edible. There are different variations of marigolds, and some taste different than others. Some of the more common breeds for eating give a citrus flavor, while others have an almost spicy taste to them.

One of the more common uses for marigold is on salads. Marigolds have also been known to be used in soups, stews, ice cream, cakes, and even smoothies.

Wait, aren’t we talking about edible flowers? Believe it or not, broccoli is considered both a flower and a vegetable. The part of the broccoli that we eat is the stem and flower of the broccoli plant.

If you don’t pick your broccoli on time, it will bloom into small yellow flowers. Broccoli isn’t the only vegetable that is a flower, artichoke and cauliflower are a part of the same group.

How to Prepare and Cook Edible Flower Petals

Many of the edible flowers mentioned above are not often eaten raw, straight from the ground.  Most are prepared in a certain dish or transformed into another food.

The first step in preparing any edible flower to eat is to make sure you are getting your flowers from a safe location.

Flowers that are growing near roadways may have contamination, and others may have pesticides on them. Ensure your flowers are from a safe location or have been properly cleaned before digging in.

One use for many edible flowers is to make a jam or jelly with the flower. Preparing your flowers for a jam or jelly is a pretty simple task. Many recipes recommend marinating your flowers (generally just the petals) overnight in a citrus base (such as lemon juice) along with some sugar to extract the flavors.

You can then boil water and add your mixture along with the flowers and simmer. Most recipes end with adding in pectin to create the texture of a jam or jelly. Some recipes have additional steps, but this is the basis of turning your flowers into a jam or jelly.

Using your edible flowers as a garnish is pretty straightforward. Once you’ve picked and cleaned your flowers, they can be cut however you’d like to add as a garnish. Some people sugar their flowers before using them as a dessert garnish.

Using flowers to make tea is a pretty simple task. Once you have your desired flower petals or buds picked, you place them in a teapot or other container.

Next, add water that is near boiling to the pot until the flower is completely submerged. Steep for approximately three minutes, give or take some time depending on how strong you want your flavor.

Edible flowers are often used in teas, jams, sauces, as a garnish, and even eaten right off the stem. Having a knowledge base of which flowers are edible could open you up to a whole new world of foods growing right out of your back door. There are many different flowers you can grow. Use our list and start planting!

Osmanthus Flower Types, How to Grow and Care 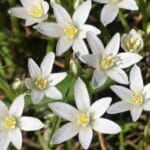 Star of Bethlehem (Ornithogalum Plant): Types, How to Grow and Care 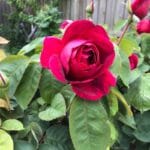 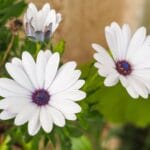 African Daisies (Osteospermum Flower): Types, How to Grow and Care 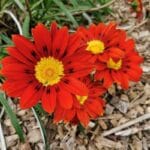 Gazania (Treasure Flower): Types, How to Grow and Care 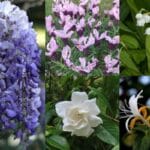 Top 10 Most Fragrant Flowers For Your Garden