Are you curious about the many types of Crown of Thorns plants you can grow? We’ll walk you through them all in this post.

But first, what is the Crown of Thorns plant?

Euphorbia milii, also known as the Crown of Thorns plant, is a type of succulent houseplant that is able to bloom throughout the year when kept indoors. It can also be grown outdoors during the spring and summer months where it can reach heights of between three and six feet tall.

When grown indoors, it usually stays under two feet tall, which makes it the perfect ornamental houseplant.

The plant’s flowers bloom in colors ranging from red, orange, and pink, to yellow and white. Its stems are generally covered in thorn-like spines that can either be hard and sharp or soft and dull depending on the variety.

The plant does produce a sap that is toxic and can cause irritation upon contact as well as irritation, stomach pain, and vomiting upon ingestion.

These are traits that all varieties of Crown of Thorns have in common, but there are many differences between them all, too. Here’s what you need to know.

Native to Africa and, specifically, Madagascar, it is said that Euphorbia milii was brought to the Middle East very early on in its history. It is in the Middle East where this plant got its nickname, the Crown of Thorns plant. This came from the idea that Jesus wore this thorny plant on his head during his crucifixion.

It was eventually brought to France in the 1800s where its popularity boomed and hybrids were quickly cultivated. This plant quickly became sought after for its beauty and ease of care as it is extremely robust and thrives off neglect.

This lovely plant has also been used for centuries for its medicinal value as well as a natural alternative to pest control — particularly snails.

So without further ado, here are some of the best types of Crown of Thorns you can grow – regardless of where you choose to grow it!

The “Brush Fire” hybrid is a variety of Euphorbia milii identifiable by its thick and glossy leaves. These plump leaves rest just below the bright red flowers that give this plant its name. When allowed to grow outside in the ground, the red flowers found on the “Brush Fire” plant can resemble a bush on fire.

Commonly used as an ornamental house plant, this hybrid also does well outside and is great for adding decor to your patio (as long as there is enough sunlight available).

This hybrid gets its name from the creamy-white flowers it produces. Its leaves are much more elongated than the ovular leaves of the “Brush Fire” hybrid and resemble a thick and fleshy grass upon which its flowers rest.

The leaves of the “Golden Gem” are what give this hybrid its name as they are bordered by irregularly shaped splotches of yellow. They are known for having sharp spines which can reach up to an inch long. While they can bloom year-round when grown indoors like all other varieties, they do require a bit more bright sunlight to properly bloom.

Its flowers can bloom a strawberry-red or creamy-yellow color and appear in groups between 2 and 6. The “Golden Gem” variety is pretty rare and not usually found on the market. If you do see it available for purchase be sure to do so!

This variety of the houseplant is particularly interesting due to the coloring of its flowers which are a creamy-yellow marked by orange and green splotches. When in full bloom, this is one of the most beautiful hybrids available. For this reason, it is one of the top picks as a houseplant.

Euphorbia milii “Gabriella” highly resembles the “Brush Fire” hybrid. While they do have slightly thicker leaves and moderately thinner stems, the main difference is the coloring of the flowers produced by “Gabriella.” These flowers, rather than appearing bright red, are a soft, rosy-pink color.

This hybrid hails from Germany where its original species found in Madagascar was propagated and cultivated. They can be more difficult to locate for purchase within the United States.

Another German hybrid not included in this list is “Somona.”

Another hybrid very similar to “Brush Fire,” the “Pieta” plant produces flowers that are more salmon-pink in color.

Often compared to the colorful wings of a butterfly, the flowers produced by “Flame of the Forest” are uniquely hued. Upon their first bloom, these flowers look yellow-green and have an intense red color in the middle. As they mature, the red spreads across the surface of each petal leaving a yellow-green stripe on the perimeter of the entire flower.

Due to their distinct and attractive coloring, this hybrid is extremely popular as an ornamental houseplant. However, you can always grow them outside during the spring and summer months.

The “Short and Sweet” hybrid is considered a dwarf cultivar due to its short stature which ranges between 12 and 18 inches. Rather than sharp, rigid, thorn-like spines, this variety grows soft spines that do not hurt to touch. It produces many bright red flowers which add to the beauty of the plant.

Because of its beauty and size, “Short and Sweet” is commonly employed as an ornamental house plant. Its small size is not the only feature that makes this plant great for indoor spaces but its extreme tolerance of neglect, as well. It can withstand being both over and under-watered making it the perfect plant for a beginner.

“Mini-Bell” is another dwarf cultivar that also only reaches heights of up to 18 inches. It features tightly packed, small red flowers and soft spines very similar to “Short and Sweet.”

This hybrid is a great alternative to larger varieties for those who do not have much space.

The California hybrids, also known as the Giant Crown of Thorns, are notorious for their extremely large flowers and very short stems. They are also more difficult than other varieties to find on the market.

“Rosalie” and “Saturnus” are both great hybrids for growing outdoors but they can also be cultivated as houseplants.

Thai hybrids are extremely popular as collector plants in Southeastern Asia but are not as much so in the United States and Europe. This is due to an economic collapse in Southeast Asia in the 1990s during which many of these varieties were lost.

Considered a Thai Giant Euphorbia hybrid, the “Paradise Lady” is easily identifiable by uniquely shaped, pink and white blooms. The petals of each blossom swirl together forming a bowl shape that is white on the inside and bordered by a light pink color.

Many consider this to be one of the most beautiful hybrids of all the Euphorbia milii.

This kind of houseplant is available in a double-form which means they produce more petals than regular varieties. This occurs when the stamen of the flower turns into petals and no longer produces pollen allowing it to be in bloom for longer than usual.

It is better to keep these inside because they are not beneficial to bees in the same way as other varieties.

There is also a separate species that you need to consider if you’re thinking about growing this house plant.

Found in the same genus as Euphorbia milii, lophogona’s leaves are much longer and have a more leathery texture. They also grow in a more upright pattern making them taller but not as wide. The smaller width is because they tend not to sprawl outwards as much as its counterpart.

Euphorbia lophogona is commonly referred to as the “White Crown of Thorns” due to the white flowers it produces.

As you can tell by the list above, which is not exhaustive by any means, there are so many varieties of this gorgeous plant available for you to grow.

They are one of the best house plants for beginners to attempt growing because they are so resilient and do thrive on neglect. Only needing water when its soil is dry and sunlight a few hours a day, this plant is especially great for anyone who does not have a lot of extra time on their hands.

With many options available, you can choose a Crown of Thorns hybrid that looks perfect as decor in your home. You can even color coordinate its blooms with the color scheme of your own house! Just be sure you plant it in well-draining soil and you should be good to enjoy your beautiful blooms all year long. 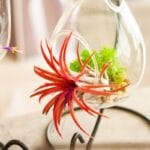 4 Types of Epiphytic Plants You Can Grow 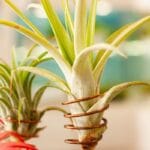 How to Grow and Care for Epiphytes 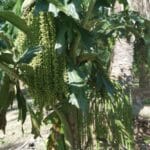 9 Types of Fishtail Palms to Grow 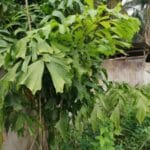 How to Grow and Care for Fishtail Palm Trees 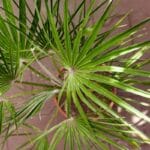 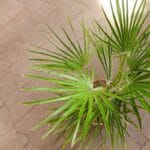 How to Grow and Care for Fan Palms