Are you wondering about the difference between the peace lily vs. calla lily? If so, this article will clear things up for you.

It is important to know the difference between the two because, though both are quite beautiful, they are two different and distinct members of the Araceae family.

Both plants can be grown indoors or outside (depending on your climate), but peace lilies are larger than callas and both have different care requirements.

Here’s what you should know.

Before we can break down the difference between calla and peace lilies, it’s important to first explain what we mean by the word “lily.” This is a word used for all kinds of plants, including lilies, daylilies, lily of the valley, calla lily, canna lily, and peace lily. But they aren’t all the same!

True lilies are those that belong to the Lilium genus, which is a group of plants with large flowers that grow from bulbs. There are two types of true lilies – Asiatic and Oriental lilies.

Calla lilies are not true lilies. They look much like lilies, growing in a bulbous trumpet shape. However, callas belong to the Zantedeschia genus.

Peace lilies are also not true lilies – instead, they are members of the Spathiphyllum genus.

That nomenclature makes sense when you realize that this flower has a hoodlike sheath (known as a “spathe”) that gives it its name.

Is a Calla Lily the Same Thing as a Peace Lily?

A calla lily is often misidentified as a peace lily but the two are not one and the same. There are several differences between the two in terms of growth, foliage, flowers, and cultural requirements.

Peace lilies are quite large, often growing up to six feet or more in height. They can spread anywhere from one to five feet, with the flowers and foliage rising up from the crown. This plant can also take on a clumping form.

Callas, on the other hand, only grow to about three feet tall and wide. Instead of having foliage and flowers growing from the crown, this plant produces new growth from underground rhizomes.

The two plants are also different in their foliage. Calla lilies, as mentioned, can be grown from underground rhizomes as well as from tubers, corms, or bulbs. These plants have leaves that are small and shaped like arrowheads. These are often a paler shade of green than the leaves you see on a peace lily.

Some types of calla lilies have foliage with a smattering of white spots, too.

Peace lilies are herbaceous perennials. As such, they have broad, elliptical leaves that can grow up to six inches across and about two feet long. They have glossy foliage that tends to be a rich, dark green in color. However, there are some cultivars that have unique variegated foliage as well.

Yet another difference between these two types of plants is in the flowers. This is perhaps the easiest difference to identify. Peace lilies have flowers that consist of a thick, yellow spike.  They also have something known as a “spathe,” which looks like a cobra and is a large white flower bract. The spathe will typically only appear on one side of the flower – it will look as though it is cradling the rest of the plant.

This, of course, is where the peace lily gets its name, so it’s often considered a defining feature of the plant.

Peace lilies bloom at any time, even in the winter, when grown indoors, while callas only produce summer flowers. These can be found in shades such as cream, yellow, pink, or purple, depending on the cultivar you decide to grow. These flowers are thick spikes that protrude from the center, often appearing within a spathe that is shaped like a funnel.

A final difference between these two types of plants is in the conditions they prefer. Callas prefer soil that is moist to wet, growing best in full to partial sun. They can be planted directly in water, too, which is a unique feature that makes them perfect for areas around ponds or other water features.

Peace lilies can be grown in a bit of shade but prefer light that is bright and filtered (making them great indoor plants). These flowers bloom regardless of the light conditions, in most cases.

Like callas, peace lilies like moist soil – but they don’t like it quite as soggy. Instead, you can let the soil dry out between waterings to ensure the health of this plant.

When grown outdoors, peace lilies perform best in hardiness zones 11 to 12, while callas do well in zones 8-10.

Calla lilies are related to plants such as caladium and jack-in-the-pulpit. In most climates, they aren’t winter-hardy, so you’ll need to dig up the rhizomes and store them over the winter if you plan on growing them outside. Indoor growing is one other alternative!

These types of plants should be grown in deep, moist, rich soil in full sunlight. They can also grow in partial shade but won’t bloom quite as well. They can grow in soils that are boggy or alkaline.

When you plant, you should set the rhizomes four to six inches deep and one to two feet apart. Fertilize each spring (or every spring when you re-plant, if you live in a colder growing zone) by using a 5-10-10 fertilizer.

If you grow callas indoors, the same planting guidelines apply. Aim to keep temperatures between 65 and 75 degrees. If it gets much colder than 55 degrees, your plant could go dormant or die.

Peace lily plants are native to the tropical rainforests, so they grow well in a home environment.

Grow them in light partial shade (fluorescent lights are fine). You’ll know whether your plants are getting the appropriate amount of light by looking at the leaves. If they become brown, this indicates that they are being scorched from too much sunlight. If they are yellowed, the light might be too strong, too.

A good idea is to place your potted plants about six feet away from a north- or west-facing window.

Water when the plants droop slightly. The soil should be allowed to completely dry out. Even if your plant starts looking a little dried out or ragged, don’t panic – they tend to bounce back quickly from underwatering.

They are, however, quite sensitive to chlorine. Therefore, if you are watering your plants with tap water, you may want to let the water stand in a container overnight so the chlorine can dissipate before you use the after to irrigate your plants.

In the summer, you may need to spritz the leaves with water occasionally, too.

These plants prefer indoor temperatures of around 65 to 85 degrees. They also like things to be quite humid and don’t tolerate cold drafts well. They are fairly resilient to most diseases and insects – spider mites, aphids, and mealybugs are the only issues to watch out for, but you can easily get rid of these pests by wiping down the leaves.

Because peace lilies aren’t true lilies, you don’t have to worry about their toxicity – unless you have cats and dogs. Although they aren’t toxic to humans, they contain calcium oxalate, which can be dangerous for animals.

Peace or Calla Lilies – Which of These Flowers is Right for Me?

Both peace and calla lilies are gorgeous flowers that will make a serious impact in your home or landscaping. Both can be grown indoors and in some environments, outdoors as well.

Depending on the species, you’ll be able to find either of these two plants in a variety of colors, sizes, and styles.

Neither is best – but consider which will fit your landscaping or decor needs to help you decide which to grow!

How to Grow and Care for Water Hyacinth (Eichhornia)

Top 20 Flower and Plant Identifier Apps You Can Use

Companion Planting: What Flowers To Plant Together? 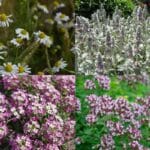