Are you a gardener or houseplant collector? Have you already heard of a snake plant? Do not be afraid! It is not the kind of plant that will sneak and crawl into your room. It will also not bite!

Curious? Then you are in the right place! Read below to know more about the snake plant and see if it will be able to mesmerize and touch your green heart. This article will also provide you with solid information that will guide you on what potting soil to use for all snake plant types.

The snake plant which has the scientific name of Dracaena trifasciata today is the formerly known Sansevieria trifasciata. The change in the name also means a reclassification of its identity in the world of plants.

The name Sansevieria is now nested within the genus Dracaena after the discovery of some evidence from anatomical and molecular phylogenetic studies. It is now linked with other plants like Lucky Bamboo, Song of India, and Dragon Tree.

Although the sudden change has caused some people dismay, the common names are not affected and they remain the same. People still call it a snake plant referring to the sharp edges and elongated shape similar to a snake.

Others prefer calling it mother-in-law’s tongue maybe because it reminds them of their mother-in-law for whatever reason it might be. Shout-out to our lovely mothers-in-law!

The Dracaena trifasciata has a native range throughout the rocky and dry habitat of tropical Africa. It has been introduced in many parts of the planet as an ornamental plant, indoor plant, and fiber crop.

In some areas, it is listed as an invasive weed because it can easily and fastly reproduce via seeds, rhizomes, and also by leaf segments. It is also quick to thrive in locations that are directly exposed to the sun or in full shades.

Despite the risks, many nurseries widely cultivate it as a potted plant marketed with excellent air-purifying abilities; hence, the probability to expand its geographic distribution even more.

Snake plants and similar species are adapted to the harsh conditions of an arid climate. They have developed structures and skills that will enable them to survive long dry periods and nutrient-poor soils.

Their fleshy and waxy foliage is not just for display but also functions for storing and sealing water. The leaves can also undergo a special process called Crassulacean Acid Metabolism (CAM) that allows them to open their stomata only at night.

The cooler temperature during the night prevents the escape of more water than when stomata are open during the day. The plant itself also exhibits abilities to tolerate high salt levels and low nutrients soil.

Guide to Choosing The Best Potting Soil for D. trifasciata

There are about 435,000 plant species known to live on the land surface of the earth. Every species is different on its own. Thus, it is important to note that you cannot find a one-for-all potting soil because each species will require a unique one. But do not be overwhelmed by the numbers, choosing a potting soil is as easy as ABC!

The golden rule is to select snake plant soil that simulates the natural habitat of your plant. Ferns are for forest floors, carnivorous plants are for bogs, while many flowering annuals are adapted for grasslands.

On the other hand, snake plants as a succulent will surely love a gritty and airy mix that will remind them of the rocky and dry soil of the arid regions. Again, the keyword for snakes is grit!

A potting soil that is made up of coarse materials and is well-draining will prevent root rot especially if you are heavy-handed on watering. Snake plants are highly susceptible to root rot caused by soggy soils that are further worsened by the attack of pathogens such as fungi and bacteria.

A consistently moist mix which is typical of many houseplants is not needed because snake plants have their way of efficiently using stored water inside their system. They are also very hardy and highly tolerant of heat and drought. Sometimes neglecting them for a long time is the best way to take care of them.

Lastly, they require potting soil with pH levels between 5.5 – 7.5 which are slightly acidic to slightly alkaline.

Potting blends specialized for cactus and succulents are ideal for snake plants. A lot of these are available in online markets and local garden shops. But if you want to create your own, the following are the most commonly used materials:

These are materials collected from living organisms. They can either be a part of or just dead living species. Over time they will decay and will be a source of organic matter for the plants.

Often used as a base in many potting mixes, peat moss is excellent in holding water and nutrients. It is collected from bogs and is made up of slowly decaying species of mosses and other organic materials.

The function of coco coir is similar to peat moss but in a more earth-friendly way. The process of collecting peat moss from peat bogs is destroying ecosystems and producing large amounts of carbon in the atmosphere. Coco coir is a by-product of the coconut industry.

Compost is made from a mixture of decayed plant residues, manures, food wastes, and whatever organic material it can be. It is a good conditioner and fertilizer for the soil.

It provides aeration and prevents the sinking of the potting mix. However, it does not hold much water and nutrients. If the pine bark is reduced in finer size, it can substitute for peat moss or coco coir.

This volcanic rock makes any potting light and airy. But do not be confused with vermiculite which is heavier and retains more water. Make sure to also use a mask because it contains particles that can damage the lungs if inhaled.

Use a builder’s sand or horticultural sand made from crushed granite, quartz, or sandstone. They are coarse and feel gritty which improves soil drainage. Do not use fine sand because it even helps the potting mix to be heavier and more compact.

Pumice provides aeration and helps anchor the roots of any plant. It is heavier than perlite so you will not worry if strong winds can overthrow your plants.

Gravel of smaller size ¼” to ⅛” is a cheaper component of potting mixes. Its functions are similar to perlite and pumice. It must be mixed with the potting soil because using it as a mulch or as a bottom layer only increases the risk of root rot.

How to Repot D. trifasciata 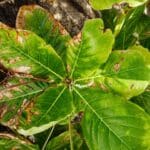 How to Deal With Fiddle Leaf Fig Brown Spots 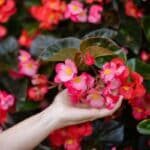 How to Grow and Care for Wax Begonia Plant 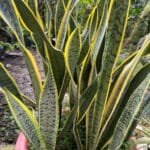 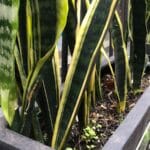 Snake Plant Leaves Turning Yellow: 5 Reasons and How to Fix 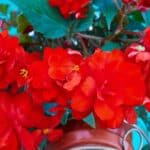 How to Grow and Care for Tuberous Begonia Plants 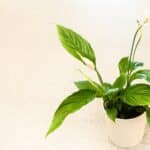 Best Peace Lily Soil: What You Need to Know