Succulents are recognized as some of the easiest plants to grow and many common types are often recommended to amateurs and novices in the plant world.

While it is true that succulents can survive (even prefer) heat and drought and therefore requires minimal care, there is a notorious problem, even the experienced have a hard time dealing with root rot.

What is Root Rot?

Root rot is a disease all plants are susceptible to, particularly if the soil is wetter than it should. In the case of succulents, the roots turn black or brown, soft and mushy, and may even emit a foul smell like that of decaying vegetables (1).

The root system is universally known as the one responsible for the water uptake and anchorage of the plant. But it also takes up oxygen from the spaces in between the soil particles to support its processes like photosynthesis, respiration, transpiration, etc.

When there’s too much water, the soil becomes saturated, displacing the air packets. The roots are starved of oxygen and hindered from taking up water which will slowly lead to the death of the plant starting from the roots.

Root rot may also be attributed to pathogenic causes like fungal and bacterial infection but this is rarely the case for succulents grown indoors unless the initial planting materials and tools used are already contaminated.

While pathogens thrive where moisture is high which brings us back to wet soil, it is important to properly identify which actually caused the disease in order to apply the appropriate treatment.

Signs and Symptoms of Root Rot

You might be wondering ‘how do I know if my succulent has root rot?’

Root rot is difficult to identify at the onset of the disease since the underground part is hidden in the pot. More often than not, the disease is irreversible before it gets recognized.

Usually, the upper part of the plant like the stem and lower leaves turn translucent yellow and soft and the leaves will fall at the slightest touch. The plant may have visibly collapsed with all parts mushy in which case, it will not recover.

If you’re slightly fortunate and chanced upon the early stages of root rot while repotting, the soil is noticeably wet and the root system it surrounds is dark and soft unlike the healthy white and long roots with minute fuzzy root hairs. If it has progressed, the root system may appear non-existent or shallow and thin (2).

How to Save Your Succulent Plants from Root Rot

As mentioned, identifying succulent rot before it’s too late is hard, especially for the succulent neophytes. But even if the disease is already present, there are several ways to salvage what is left of the plant. Here’s how to cure root rot:

If the rot has only affected some of the lower leaves, there’s a good chance that the plant can still be saved. Gently uproot the plant, loosen the soil around the roots, and let it dry in a well ventilated and bright area for a few days. It is necessary to maintain some soil so that the roots will not desiccate.

Once dried, gently rinse the roots and inspect for brown, black, and mushy decaying roots. Remove them by cutting all infected parts and leave the healthy, white ones. You will also be able to check on the stem and see if the rotting has progressed.

Let the plant dry for a few hours before repotting with a gritty succulent potting mix. Keep in an area where there’s bright, indirect sun and water only after a week. Water thoroughly and rarely (once every two weeks) moving forward.

Succulents that have roots rotting for a while will have translucent yellow or worse, brown to black stem and leaves. If the majority of the above-ground parts are still green and intact, the only way to save the plant is by removing the rotten part.

Uproot the plant and check the extent of rotting, remove all yellowing and mushy leaves. Using a sharp and sterilized blade, cut the stem until only the healthy part remains. Discard the rotten half.

Succulents are known to produce aerial roots so just like when propagating, allow the wound of the plant to form callus and heal in an area where there’s good air circulation. Watering is not necessary.

Make sure that the stem is exposed enough to produce roots and be easily planted. Remove lower leaves if needed. After several weeks to a few months, the plant should form enough healthy roots and should be ready for planting.

How to Prevent Root Rot

Root rot, even if pathogenic, starts and worsen with overwatering. The golden rule in growing succulents indoors is “when in doubt, don’t water”. It’s better to hold off watering for one or two more days and let the soil dry out because these plants are called succulents for a reason, they have an ample reserve of water in their system.

Succulents should have time to breathe and dry out before being watered again. To check if they need rehydration, the ancient technique of inserting at least one inch of your finger into the soil is still handy and effective. If it feels wet or damp, let it dry for a few more days.

Succulents can go 10-14 days without watering. In fact, you may go on leaving the soil dry until some of the leaves start getting slightly wrinkled. They will turn turgid again once thoroughly watered. Thorough watering means the water is applied until it is seeping through the bottom of the pot.

However, thorough watering of your succulents will not work if the growing medium is poor-draining. Succulents should be planted in a well-aerated, gritty soil mix in order to have access to oxygen and water without drowning.

A good soil mix should have both organic matter and inorganic material. You can choose any available or preferred materials but the mix should stay light and gritty to retain enough water and at the same time, drain well.

Holes in the Pot

Proper watering and the use of well-draining soil is useless if your pot does not have sufficient drainage. A lot of succulent novices transfer their plant to fancy, decorative containers without realizing the absence of drainage holes.

No matter the material of the pot, it should have at least one hole, preferably 3 holes, to allow the excess water to drain. Keep your potting mix from running off by placing a fine mesh at the bottom of the pot as a filter.

If you’re interested in caring for succulents, check this guide to learn how to get rid of mealybugs on succulents. 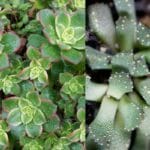 30 Unusual and Rare Succulents You Should Know

Rosette Succulents: Types, How to Grow and Care 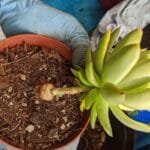 The Ultimate Guide To Repotting and Replanting Succulents 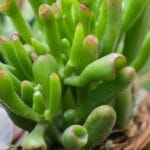 Gollum Jade (Crassula ovata ‘Gollum’): How to Grow and Care 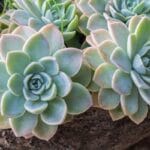 Echeveria Succulent Plant: Different Types, How to Grow and Care 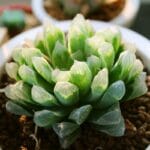 Haworthia Cooperi (Cooper’s Aloe): Types, How to Grow and Care