Although one of the most challenging types of orchids to bring into bloom, vanilla orchids continue to be a popular plant. They are highly valued for their ornamental and commercial uses.

There are hundreds of vanilla orchid species, but the most common of all is the Vanilla planifolia or commonly known as the flat-leaved vanilla orchid.

In this article, we’ll discuss everything you need to know about vanilla orchids in general, but we’ll focus mainly on flat-leaved orchids. Read on below to learn about this famed orchid’s facts, types, and growing tips.

Vanilla (Vanilla spp.) is a genus of monopodial epiphytic orchids that typically flowers in spring to summer. They are known for their vine-like structure that allows them to crawl and attach to tree trunks and branches. Plants in the genus are mostly native to Central America (1).

Aside from their ornamental and commercial importance, these orchids, most notably the flat-leaved vanilla plants, are likewise highly valued for their fragrant and fleshy seedpods used as flavorings. Today, vanilla is the third of the most expensive spices in the world, next to saffron and cardamom (1).

The name vanilla originated from the Spanish word vainilla, which means “little pods”  and refers to the plant’s fruits (1). The species name planifolia in Vanilla planifolia orchids refers to the striking flat shape of the leaves. Thus, these orchids are more commonly known as flat-leaved vanilla or the Bourbon type vanilla.

Flat-leaved vanilla orchids are perennial climbing plants with succulent stems that arch to tree trunks and other forms of support in a zigzag manner. They typically reach a height of 10 to 15 meters (1).

These orchids also feature thin and long aerial roots. Their leaves are large, thick, bright green, flat, and smooth. Each leaf measures about 10 to 23 cm in length and 4 to 6 cm in width. The flowers of vanilla orchids usually bloom two to three years after planting. They are waxy, large, fragrant, and pale yellow. Each flower grows about 5 cm in diameter (1).

Vanilla fruits, commonly referred to as vanilla beans, are pendant pods that measure 10 to 20 cm long. They appear greenish-yellow when fully matured and ripen gradually, which usually takes about 8 to 9 months after the onset of flowering (1).

Vanilla planifolia, otherwise known as flat-leaved vanilla orchid or Bourbon type vanilla, is the most popular and widely used vanilla species because of its extracts. Vanilla extract, which is obtained from the plant’s seed pods, is a valuable flavoring. It is commonly used in baked goods, desserts, beverages, chocolates, dishes, and more.

Unlike other orchid types, vanilla orchids are more recognized for their extracts and not really as houseplants or garden plants. Still, that does not mean that you cannot grow vanilla bean orchids at home or in your garden!

In fact, orchid collectors and serious enthusiasts also include these plants in their collection as they also make an attractive sight in any area.

However, it’s important to note that vanilla orchids are not easy to grow for beginners. A greenhouse can be extremely useful, particularly if you’re not in a frost-free climate.

These orchids grow well on various soil types (1). Choose a pot, preferably a clay pot or container, with good drainage and fill it with fertile soil or potting medium. You can use fir bark and terrestrial orchid mixture, or a mixture of equal portions of organic soil, chopped tree fern, and shredded osmunda.

Because of their climbing growth habit, vanillas require a pole or stake for additional support.

You can easily buy a potted vanilla plant or cuttings. For cutting, choose those with at least six nodes. Large cuttings (24 to 36 inches) take two to three years to flower production, while smaller cuttings take three to four years (2).

Once vanilla vines have commenced flowering, hand-pollinate the flowers in the late morning. You can do this by removing pollen from the stamen of one flower and placing it on the stigma of another vanilla flower. Pollinated flowers will wither on the vine, and then small green pods will form within a week. These pods will then be ready for harvest in 9 to 10 months.

These plants require regular watering. Keep vanilla orchids evenly moist, but allow the potting mix to dry out between watering. When watering, it’s crucial also to dampen the vine structure since these plants are developing air roots.

Like many other orchid types, vanilla orchids are shade-loving plants that prefer about 50% to 60% shade (1). They can tolerate short periods of direct light in the morning. Note, however, that excessive light may result in stunted growth. Insufficient light or excessive shade, on the other hand, may lead to thin stems, small beans, and fewer flowers and fruits (1).

Soil rich in potassium and calcium is ideal for vanilla plants. It should be light, well-draining, and with a pH between 6.0 to 7.0 (3).

This method means applying a dilute or quarter-strength fertilizer each time you water rather than feeding a full dose once a month. Avoid using fertilizer to a dry vanilla plant since this can cause damages to the roots and leaves.

Vanilla orchids are generally free from major pests and diseases. However, they are susceptible to root rot. Root rot can be a result of overwatering or a fungus in the soil. Common symptoms of this plant disease include dull and yellowing leaves, wilting, and mushy, black roots.

Other Types of Vanilla Orchids

Aside from V. planifolia, V. pompona, or commonly known as West Indian vanilla, is another species of vanilla used for its fruits (4) and a secondary source of vanilla flavoring. It is native to southern Mexico and South Tropical America (5). The West Indian vanilla orchids feature long thin stems that measure about 2 cm in diameter and over 5 m in length. The long leaves, which measure 10 to 30 cm, are thick, dark green, and glossy.

The inflorescence of this orchid species forms that the base of a leaf. Each inflorescence typically has six to eight white, yellow, or pale green flowers that are mildly fragrant. They open in succession, with each bloom lasting for only a day.

The fruits or vanilla beans of V .pompona are green and usually 10 to 15 cm long, but can grow up to 30 cm.

Tahitian vanilla (V. tahitensis) is a hybrid between V. planifolia and V. odorata that was first introduced in Tahiti, hence the name. It produces shorter and broader seed pods than those of a more widespread species, the flat-leaved vanilla (V. planifolia).

Aside from the difference in appearance, this orchid species also have a distinct taste and fragrance (6). It is commonly used in desserts, fresh fruits, baked goods, beverages, sauces, and more.

Like other vanilla orchid species, Tahitian vanilla orchids have a vine-like growth habit. The leaves are narrowly elliptic, and the flowers are yellowish-green.

Leafless vanilla or V. aphylla is a vanilla orchid species native to Southeast Asia. It is cultivated in Laos, Malaysia, Thailand, the Philippines, Myanmar, and Singapore. The plants produce clusters of three to four flowers on a short inflorescence. They bloom in late spring, summer, and fall.

This particular type of vanilla is named as such because of its unusual leafless vine-like thick stems. These stems have internodes spaced at about 4 inches apart. These internodes produce short and thick sheath and roots.

Chamisso’s vanilla or V. chamissonis is a vanilla species native to South America. It is named in honor of German poet and botanist Adelbert von Chamisso. The plant features fleshy, pale green leaves and blooms in late spring to early summer.

Vanilla mexicana, or commonly known as Mexican vanilla, is a type of vanilla orchid that can be found growing in Mexico, Central America, West Indies, northern South America, and southeast Florida. The plant produces vines that grow up to 15 in length. 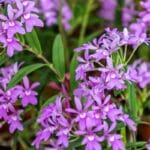 Epidendrum Orchids (Star Orchids): Types, How to Grow and Care 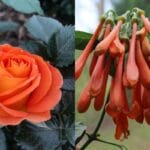 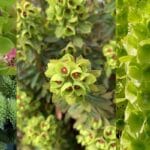 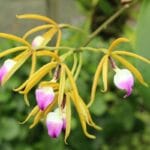 Encyclia Orchids (Butterfly Orchids): How to Grow and Care 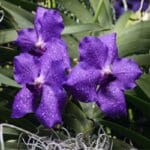 Vanda Orchids: Types, How to Grow and Care 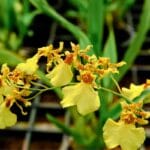 Oncidiums (Dancing Lady Orchids): Types, How to Grow and Care