The common saying, “Looks can be deceiving”, is proven true by the Virginia Creeper Vine. This broadleaf deciduous climbing plant will surely serve the aesthetics and functionality of a landscape.

However, this vine may cause potential problems and harm not only to the existing vegetation but also to users of the space. Hence, proper planning, implementation, and maintenance must be done. The first step in doing this is by knowing more about the plant.

Its genus, Parthenocissus, is a synthesis of the Greek words parthenos, which means a virgin, and kissos, which means ivy. This is why it is commonly mistaken as the Poison Ivy. However, the species of the Virginia Creeper, quinquefolia, translates to five-leaves.

Poison Ivy and Virginia Creeper differ by the number of their leaflets, wherein the former has three and the latter commonly has five and sometimes seven.

The vine comes from the same family as grapes, Vitaceae. Same as grapes, it is distinguished by its climbing nature, tendrils, leaves, and berries.

The Virginia Creeper is native to Mexico, Eastern, and Central North America. It loves to grow on areas wherein the soil is not too wet nor too dry, and has good drainage. Given this preference, the vine is commonly seen on shaded woods, streamsides, open woodlands, riverbanks, chaparral, and brush countries.

It is best planted in USDA Zones 3 to 9.

As one of the main attractions of the American Ivy, its leaves are alternate, serrated, and palmate with usually 5 to 7 leaflets. The leaves change their colors as the seasons come and go. It has a purple pigment during spring. As summer comes, it matures to a flat green pigment. During fall, their leaves are more captivating with colors varying from royal violet to crimson red.

The P. quinquefolia gives off subtle and simple flowers that are often white or green.The Virginia creeper flowers are often seen at the lead apices during the months of May or June when they normally bloom.

As part of the same family as grapes, fleshy fruits arise after the flowers were pollinated. It comes in the colors blue, black, or purplish-black.

As a deciduous vine, the Virginia Creeper vastly grows wherever it is planted. Oftentimes, its growth is hindered by the lack of supporting structures where it attaches, such as trellises, barks, and rocks. The vine can go as high as 30 to 50 feet, and as wide as 5 to 10 feet.

Grow and Care and Maintenance

The Virginia climber thrives when planted in areas with full sun to partial shade. It can also survive under a canopy with blotchy sunlight. During flowering and fruit-bearing stages, it is better to give the plant at least 6 hours uninterrupted exposure to sunlight for continuous growth and development.

Five-leaved ivy can grow in areas with low moisture. However, watering, as part of the maintenance plan, should be scheduled every so often to keep the soil moist enough.

The withstands most climatic conditions and is not that sensitive to temperature.

Application of fertilizer should be done as needed, depending on the soil fertility status. During its flowering stage, it is better to avoid the application of nitrogen fertilizers as it will encourage leaf formation and may hinder flower formation.

Given its native habitats, the Virginia Creeper prefers to grow in moist and well-drained soils. Rocky, clay, limestone-rich caliche, clay loam, loam, sandy loam, and sandy soils are the soil types that are most beneficial for the plant’s growth. It also thrives in soils that vary in pH levels, whether it be acidic, neutral, or alkaline.

Commonly, the American Ivy is reproduced through seeds. After the flower has been pollinated by insects and birds, berries are formed. The berries are ripe when it is bluish-black and succulent. Extract the seed from the berries then air dry. Then, store the seeds in an airtight container under low temperatures. Sowing of seeds during spring is advisable but plant cuttings or layering are suggested to be done during fall.

In choosing the right wood to cut, choose a half-ripe stem, around 2.5 to 4 inches long with the presence of 2 true buds, at least. Application of root hormone in the right amounts may be beneficial for root development. In terms of layering, usually, this vine can undergo self-layering.

Removal of dead plant parts should be scheduled every 2 or 3 weeks to ensure the plant’s vitality. Also, it helps lower the vine’s susceptibility to various insect pests and diseases.

Deadheading or removal of dried flowers should be done if fruiting is not a priority. Trimming of old leaves will rejuvenate and promote the production of new leaves. It is also recommended to trim regularly to keep the plant’s shape for the landscape.

Aside from the possibility of establishing a strong competition towards other vegetation in the landscape, the Virginia creeper plants also impose harm to the users.

The berries are highly toxic when ingested. Nausea, vomiting of blood, diarrhea, abdominal pain, excessive sweating, weak pulse, headache, drowsiness, and twitching of the face are some of the symptoms of being poisoned by the Virginia creeper vines.

The vine’s tissues also contain raphides, which cause skin irritation. Compared to the Poison Ivy or Toxicodendron radicans, the effects are less severe but the resemblance makes people assume that the Virginia creeper is poison ivy.

More often than not, vines, such as the Virginia Creeper, are used to soften existing man-made fixtures. It is left to climb and twine trellises, arbors, fences, and green walls. Having broad leaves makes it suitable as a screen or privacy fence. It can be used as a ground cover vine too.

For the wildlife, the P. quinquefolia serves as a food source and habitat for fruit birds, nuthatches, mockingbirds, catbirds, swallows, woodpeckers, and chickadees during winter. It also serves as a larval host for various sphinx moth species.

The cultivar Parthenocissus quinquefolia var. engelmannii goes by the name Engelmann’s Ivy. Compared to the other cultivars, it grows slower, climbs faster, and has smaller leaves. The size of its foliage makes it more suitable for small gardens.

The Variegata variety, just like the Engelmann’s Ivy, is less aggressive, which makes it good for small yard gardens. Its leaves are characterized by white and yellow variegations which change to red and pink during Fall.

The Red Wall variety is also known as Troki, and it gives rise to a bright red color during fall. It can be used to add color to your walls or fences but is not recommended to be planted near buildings.

Monham or Star Showers have white variegations in their foliage which turns to light pink during the fall. The leaf variegations resemble a splat of paint.

The Yellow Wall is a variety of Virginia Creeper Vine that gives an eye-catching yellow gold color during fall. In garden exhibits and shows, the yellow wall and red wall are often showcased together in a design. This variety is optimized by letting it crawl and cover fences or living walls.

It is not completely poisonous but the berries and leaves can cause mouth, lips, tongue, and throat irritations when ingested. Other symptoms such as nausea, drowsiness, vomiting, and other intestinal problems may occur and could last up to half a day.

Can Virginia Creeper give you a rash?

Despite the resemblance with Poison Ivy, the reaction is less severe when injured by this plant. Open wounds caused by the said vine will cause mild skin irritation to some because of the oxalate crystals in the sap.

Rather than being invasive, the P. quinquefolia is labeled as aggressive due to its vast growth and development.

The Virginia Creeper is labeled as aggressive and grows rapidly due to its ability to self-layer and the possibility of reproduction through seeds and soft-wood cuttings.

For more cool vines to grow, check our list of vines. 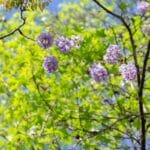