Wondering how to keep moles out of the garden? Look no further.

While some consider moles cute and sweet, they have probably never had an infestation in their yard. These tiny creatures spend their days digging for food, tearing up yards.

To keep moles out of your garden, you need to limit their food source. Mainly this applies to grubs and insects, which can be managed with insecticides and nematodes. In addition, you will need to use various repellents to dissuade them from being in your yard.

We will explore the different types of repellents and methods for removing moles from the yard. We will also cover the fastest way to get rid of them.

What Attracts Moles to the Garden?

Moles enjoy earthworms, so they are attracted to fertile soil in your garden.

They’re also attracted to other food sources in your garden and will dig through, leaving behind tunnels and mounds of dirt. Cool temperatures attract them.

The fresh produce growing in your garden attracts various insects that, in turn, attract moles. Their main source of food is grubs.

What is the Fastest Way to Get Rid of Moles in Your Yard?

Use beneficial nematodes to control the mole populations. Faster results can be obtained by using an insecticide.

Sometimes making a mole repellent is an excellent option to repel moles. The repellent will not kill the moles but it will give them an upset stomach, making your lawn a less than ideal place to stay.

You can make your own homemade repellent with three parts castor oil and one part dish soap. Then mix four tablespoons of that mixture in a gallon of water. Spray down the tunnels and entrances to your yard.

Alternatively, you can purchase liquid or granule repellents, but you need to specifically follow the directions.

Moles dislike strong-smelling plants like daffodils, marigolds, and the allium family of plants. If you plant these on the edge of your garden, you will form a natural barrier against moles. Stores do also sell ready-made mole barriers.

You can also dig a ditch around your garden. Make it two feet deep and six inches wide. You’ll then want to fill the trench with rocks or line it with wire mesh.

Moles don’t like disruptive environments so if you create an unpleasant one, the moles will be sure to leave. You can purchase a sonic spike that you will drive into the ground. It will emit electronic pulses that will drive the moles away.

Another method of getting rid of your mole problem is to keep your yard tidy. Moles like to have shelter and by taking that away, you will encourage them to move on. Keep your grass mowed, your garden beds manicured, avoid using thick layers of mulch, and remove all stacks of wood or piles of organic debris.

If all else fails, you can always call in a professional.

What is a Natural Mole Repellent?

When it comes to mole prevention, there are several options for natural mole repellent. The first one is three parts castor oil with one part dish soap and three parts water. You will need to spray the mixture on the mole tunnels.

Marigolds, daffodils, and allium plants are natural mole repelling plants. Moles cannot stand the smell of these plants and will stay far away from them.

You can also sprinkle cat litter, coffee grounds, cayenne pepper, or red pepper where you see signs of mole activity. This will prevent moles from returning.

You can set up a compost pile several feet away from your planting areas to offer to the moles as a feeding area. This will keep them from tearing up your garden and act as a natural repellent to deter moles.

If you have a cat, you can use the used kitty litter to place in the mole holes to scare the moles away. They will think there is a predator around and will flee to avoid the danger.

Another castor oil repellent consists of ¾ cup water, ½ cup castor oil, 2 tbsp cayenne pepper, and 2 tbsp dish soap. All ingredients are blended and stored in a jar until needed. When ready to be used, mix 1 tbsp of the mixture with 64 oz of water.

Do Coffee Grounds Keep Moles Away?

Save your used coffee grounds and sprinkle them in your vegetable garden. If you have a mole problem, this is a good way to disrupt their activity and drive them off. Moles cannot stand the smell of coffee.

Unfortunately, you will have to place the coffee grounds daily for them to be the most beneficial. The more you put down, the more effective this repellent will be.

It’s not official whether marshmallows kill moles or just drive them away – this one might be an urban legend. Either way, mole activity stops after exposure to marshmallows. The marshmallow method may be the least controversial method for eliminating moles.

Before you do anything related to killing a mole, you will need to clean up the yard. This will allow you to identify all of the mole holes.

Next, eliminate all possible food sources. You will need to try to remove all food sources from your yard, including bugs, snails, etc. If you don’t do this, the marshmallow method may not be as effective as you had originally hoped.

You will also need to make sure that there are no other potential food sources other than bugs in the yard. When you take away the bugs, the moles may consider stealing your food.

Next, look for the mole holes, count them, and look for any hazards around them. Place three to five marshmallows per hole.

Place marshmallows on the exit side of the holes. This will encourage the moles to want to get as far away from your yard as possible.

How to Get Rid of Ground Moles With Vinegar

Using vinegar to get rid of ground moles is safe for pets and children. It’s also effective and inexpensive. Vinegar can access cracks that poison cannot.

The scent of vinegar is a repellent for ground moles. It also prevents them from digging in their tunnels. It’s safe for use on lawns and gardens and is biodegradable.

Two methods can be used. First, you can make a vinegar spray with 5 oz of apple cider vinegar, 1-2 oz of hot pepper sauce, and water all mixed in a large spray bottle. Spray the contents into the mole tunnels.

Alternatively, pour apple cider vinegar directly into the mole tunnels during the nighttime when the moles are most active. The smell will irritate them and force them to leave.

Smells to Get Rid of Moles

There are several smells that moles can’t stand. You can get repellents that smell like these or you can make your own. The scents include potatoes, tomatoes, garlic, marigolds, and saltbush.

Some gardeners prepare what is known as an elderberry slurry, which is a special mole repellent. For those who don’t have time to go through the process of making it, they can just take some sprigs from the plant and crush them then insert them deep in the molehill.

Moles also don’t like fresh herbs. These scents will run them off quickly.

Alternatively, there are options made by manufacturers. They come in the form of a gas sprayed into the tunnels. The biggest bonus with these products is that the essential oils stick around in the tunnels for quite a while, discouraging the moles from returning.

What Do Moles Hate the Most?

Moles hate dog and cat fur. Dogs and cats are two of the main predators that hunt moles. So if you have either one of these as a pet, you can collect their fur and place it in the mole’s tunnels to chase him off.

For those of you who don’t own a dog, some stores sell products made from dog fur to help with ridding the yard of moles. It is also soaked with essential oils to ensure success.

Moles dislike people as well. So when handling things like traps, you need to wear gloves or they will never go near the device.

While moles may have a cute appearance, they can wreak havoc on your yard. Moles dig constantly to find food, pushing up piles of dirt and leaving holes all over your lawn.

There are several ways to get rid of them, including humane and inhumane methods. The easiest methods are repellents, which can be made at home or purchased from a store. 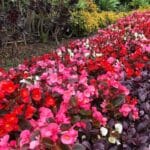 Are Begonias Deer Resistant? How to Protect Your Plants 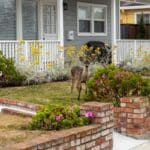 Do Deer Eat Roses? How to Prevent This Successfully 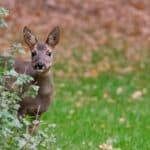 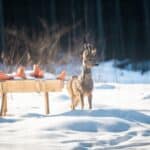 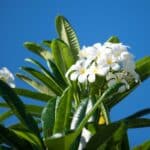 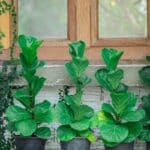