First found growing in Africa and Asia, the mimosa flower is a sunny bloom that prefers to be grown in warm climates. It is now found all over the world, however, growing in areas like the United States and even Australia.

This lovely flower is often taken as a sign of joy, but the symbolism doesn’t end there. Here’s what you need to know about this prolific bloom.

What Does Mimosa Mean?

The mimosa flower is a genus of roughly 400 different shrubs and herbs. The name is derived from the Greek “mimos,” which means an “actor” or “mime,” while the suffix means “resembling.” This is likely because the leaves are said to mimic conscious life.

Mimosa plant is a beautiful tree which produces yellow flowers that bloom in winter. It goes by many names including acacia dealbata (scientific name) and the silver wattle or blue wattle.

What Do Mimosas Symbolize?

Mimosa flowers are often tied to themes of sense and good sensibility. They can be used to show that you wish to “expand” your life, too, whether that’s in terms of your career, your family, or even travel.

In some cultures, the flower is more directly tied to sensitivity and is given as a gesture of mourning. In the United States, mimosa flowers are tied to Women’s Day.

What is the Cultural Significance of a Mimosa?

Mimosa flowers have been used for centuries in traditional Chinese medicine. The bark and leaves are also used, with the bark in particular known as a helpful tonic when it comes to cleaning the energetic pathways of the body (usually the heart and liver).

The flower can provide a significant spiritual boost and is known as the Collective Happiness Bark by these people as a result.

Mimosa flowers were also once used by the ancient Mayans to treat burns and injuries. Today, it is still frequently used in homeopathic medicine (the bark, in particular) to treat coughs, colds, pain, and inflammatory conditions.

What is the Symbolism of a Mimosa Tattoo?

The mimosa tattoo is often used to indicate symbols of sun and gold, as well as the victory of life over death. If you choose one of these tattoos, you may simply wish to convey your sensitivity, too.

When Should You Give Someone a Mimosa?

Mimosa flowers are appropriate for just about any occasion, but they are usually given at funerals and to show your sympathy in times of mourning. However, they can also be given to celebrate happier occasions or larger, more symbolic events – like Women’s Day – as well.

With their sunny nature and ability to add a ton of beauty to an arrangement, these bright flowers are perfect for practically any event. 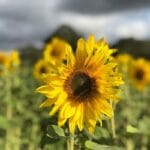