Venus flytrap (Dionaea muscipula) without a doubt is the most popular carnivorous plant among houseplant lovers and avid gardeners. It is quite tricky to grow and the plant often ends up drying after a few weeks, especially for novice growers. Believe it or not, the problem probably lies in the soil where Venus flytraps grow.

Read on if you want to know what soil to use for venus flytrap. It is not rocket science.

Where can you originally find a Venus flytrap?

Originally, the Venus flytrap was endemic to North and South Carolina but is now being introduced to other places.  It grows naturally in wetlands, particularly in boglands where the conditions are acidic, oxygen-poor, and nutrient-poor.

The harsh state of the environment it lives in is the primary cause for the development of its most interesting characteristic — to eat insects. It has no choice but to get the badly needed nutrients from the tiny animals it consumes.

Fertilizer application and use of normal soil — the golden rule

Venus flytrap is very accustomed to its native habitat. It can thrive in other places only if the conditions of its surroundings are simulated. The use of normal soil and the habit of applying fertilizer even in low concentrations will burn the roots and eventually kill the plant.

This carnivore loves exposure to direct sun. If you plan to plant it outdoors, make sure to grow Venus flytraps in containers unless you live in peat bogs. Planting it directly into your garden will damage the roots because of some harmful chemicals present in the soil. Mixing it with other plants with different growing requirements is also a big no-no.

General potting mixes sold in local garden shops are also not a good choice. They are formulated to contain essential macro- and micronutrients essential for plant growth but not for your lovely traps. Even compost and slow-release fertilizers when added can be detrimental. Fortunately, specialized potting mixes for carnivorous plants are now available in some stores.

Bogs are acidic with a pH of less than 5.0. No wonder venus flytraps will also prefer growing in an acidic potting mix with pH ranging from 3.5 to 4.9.

Peat is formed from organic materials that are partially decomposed in boggy lands. Peat moss, on the other hand, is a term used to identify densely accumulated peat from different kinds of mosses. If peat moss is used as a component in the growing medium of a Venus flytrap, it will certainly provide the required acidity level.

There are many ways and tools that you can use to measure and ensure the optimum pH for your potting mix. This can include a litmus paper test, vinegar test, and use of pH meter devices.

Sodium, calcium, magnesium, potassium, chloride, bicarbonate, and sulfate are the common dissolved minerals found in water. They remain in the potting mix after watering and venus flytraps do not tolerate these deposits. Distilled water and reverse osmosis water, albeit costs you an arm and a leg, must be used to irrigate boggy plants.

What will you need to create an artificial bogland?

The only key for carnivorous plants to thrive out of the bogs is to have a similar surrounding. To simulate a bog environment, you will need the following:

Bogs are created from fresh lakes that are slowly filled with plant debris. The vegetation that covers the surface such as carnivorous plants is adapted to consistently moist to wet conditions. As mentioned above, distilled water is ideal for watering venus flytraps. Rainwater and reverse osmosis water are alternatives to distilled water.

Peat moss is a soil amendment that is found naturally in boglands. It is a major component of many potting mixes commercial garden soils and serves as a growing medium for hydroponics. It can excellently retain water up to 10 times its mass and has a spongy texture that prevents the soil from compacting.

Perlite is primarily used to aerate the soil and potting mixes. It is lightweight and white in color. It has pores where water can get into and it improves the overall drainage of the growing medium. It can also retain its shape when the soil is being pressed down, which greatly helps in maintaining pore spaces in between soil particles.

Venus flytraps have below-ground rhizomes and long root systems. They prefer containers with a good vertical depth of at least 4” in height. They typically do not need wide-mouthed containers and a width of 3-5” will work just fine for an individual plant.

Bogs are usually found in cool climates of northern regions. Pots made of glazed ceramics, styrofoam, and plastic provide insulation from extreme weather conditions. If you are located in a relatively hot area, avoid black-colored pots that will absorb more heat that can kill your plants. On the other side, terracotta, concrete, and metal containers will leach harmful chemicals that will accumulate in the soil over time.

Other tools and materials to be used include a PVC tube, sealant, and a drill. The size of the PVC depends on your container pot and personal preference. For pots with 6” width, a pipe with ½” to 1” inner diameter is good enough.

How to create the best mini-bog for the Venus fly trap?

Pots generally come with drainage holes at the bottom. Using a sealant, make sure to seal them until water is not allowed to pass to simulate the waterlogged condition of bogs.

About half of the pot’s total height, make 4 tiny equally-distant holes around using a driller. The holes will allow water to be stored in the bottom half while making the top portion a bit drier to prevent the rotting of the rhizome. Through capillary action, the stored water below will rise and wet the top portion if it becomes too dry.

Mix 1 part peat moss and 1 part perlite in a separate container. Add distilled water little by little and wait for the mixture to become damp. The process will take some time as the peat will first absorb the water until it becomes fully saturated.

Peat moss and perlite in a 50-50 ratio is the standard mix. You can experiment by adding silica sand and other soil amendments that serve a similar purpose.

Place the PVC pipe vertically inside the pot. The purpose of the pipe is to provide a pathway of water directly into the bottom during irrigation. Overhead watering will compact the potting mix and increase the chance of overwatering. The pressure brought by the water splashes can also trigger the traps to snap and waste their energy.

Fill the container with peat and perlite mix. Although it might tempt you, avoid pressing it hard.

You can also choose to fill the PVC pipe with pumice or large-size silica sand while putting the potting mix into the container. Once full, carefully remove the pipe leaving a horizontal stack of the materials. Water will also pass through here until it reaches the bottom.

Now it is all done and it is as easy as ABC.

Can you use succulent soil for the Venus flytrap?

Most cactus mixes are enriched with nutrients that can be harmful to carnivorous plants. The pH is also adjusted to be a little higher compared to what venus flytraps would prefer.

How moist should the Venus flytrap be?

You should water thoroughly until the soil is damp all around and not so much more. Do not allow the soil to dry completely. Venus flytrap is sensitive to both overwatering and underwatering.

Should venus flytrap sit in water?

When you allow a Venus flytrap to sit on the water, you are basically watering it from the bottom. This is done by placing the pot with drainage holes at the bottom on a tray filled with water. The water will enter the roles and reach the roots of the carnivorous plants.

If your venus flytrap is unhealthy, it will have faded colors, deformed leaves, brown to black leaves, and a foul odor. The rhizome can also turn black and mushy.

How often should I feed my Venus flytrap?

Traps can be fed with small bugs once a week or every two weeks. They still photosynthesize and can survive weeks and months without being fed but noticeably shows a slower growth rate.

I hope this article gives you more ideas about Venus flytrap soil. Don’t forget to check our potting mix for indoor plants to learn more. 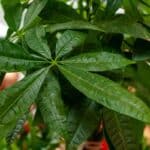 Why Are My Money Tree Leaves Turning Yellow? 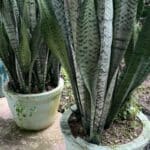 Snake Plant Watering: How Often and How Much 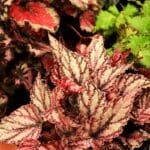 15 Begonia Rex Varieties and Types You Can Grow 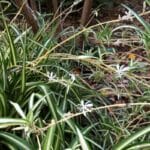 Potting Soil for Spider Plants (Chlorophytum comosum): What You Must Know 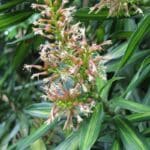 How to Grow and Care for Dracaena Reflexa Plants